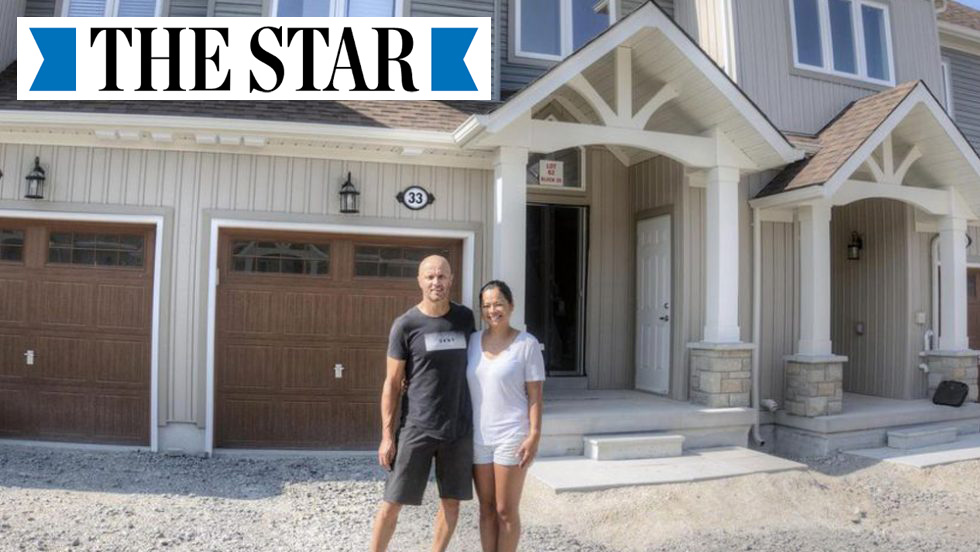 By Tracy Hanes • Special to The Star

What started as a move to raise their kids in a small town for James Zaza and his wife has become a family-wide initiative in real estate investment.

Zaza, a landscape contractor, wife Linda Truong, and their kids, aged 6 and 4, moved from their home in Richmond Hill 18 months ago and relocated to Collingwood. The family had a weekend/vacation home in the area, where they skied during winters.

Eighteen months ago, the Zazas sold their Richmond Hill home and their weekend house, bought a detached home and relocated to Collingwood.

As a landlord of rental properties in the GTA, Zaza became interested in the rising home prices in Collingwood. His sister- and brother-in-law also fell in love with the area; so they and the Zazas purchased a total of six new townhouses in MacPherson Builders’ development, Blue Fairway, set along a golf course and minutes away from Blue Mountain ski resort and downtown Collingwood.

The townhomes range from two-storey, three-bedroom, 1,300-square-foot units to 2,220-square-foot, four-bedroom bungalows, and were priced from $320,000 to $396,000. One closed in November 2017, another this past April, with three more to close in August and the final one in October. Like many builders, MacPherson offers a referral incentive — ranging from $1,500 to $4,500 — for friends and family who buy.

With his family home now one of the Blue Fairway townhouses, Zaza plans to rent out his other two. His brother-in-law uses his as a weekend vacation home, and his sister-in-law hasn’t yet decided what to do with hers.

“Typically, for a three-bedroom townhouse, you can get $1,500 to $2,400 per month in rent,” Zaza says. “I like long-term, I’m not into seasonal renting, but you can get big money for a winter rental.”

A Collingwood winter rental can command $10,000, or substantially more, for three months, based on local listings. Collingwood has a vacancy rate of 0.7 per cent, so there is hot demand for long-term rentals, as well as short-term, seasonal accommodations.

Zaza prefers to buy new, pre-construction homes as investments, as he finds resales more expensive; there are also substantial equity gains between phases of new developments.

According to statistics from the Southern Georgian Bay Association of Realtors, based on MLS transactions, sales in the western region, including Wasaga Beach, Clearview Township, Collingwood, The Blue Mountains, the Municipality of Meaford and Grey Highlands, the average home sale price in June was $536,718, up 9.4 per cent from June 2018. In Collingwood specifically, the median sale price edged up 3.2 per cent on a year-over-year basis to $565,000 — a new record for single detached properties.

Zaza likes real estate as an investment, since he can put a deposit down, enjoy equity gains and have someone else pay the mortgage. He says if he has a $260,000 mortgage on a property, for example, $2,000 in rent brings in positive cash flow that covers the expenses.

However, he notes that it’s difficult to get financing for multiple properties, and buyers will likely have to come up with at least a 50 per cent down payment for each.

“Most lenders only allow you to have so many doors,” says Chris Dopp, principal broker with The Mortgage Centre in Collingwood. “Most allow a maximum of four to six units, whether it’s a four-plex or six-plex or individual homes. A lender will also only look at 50 per cent of the rental income when you are applying for a mortgage, yet they factor in 100 per cent of the mortgage costs and taxes.”

Dopp says units intended as short-term rentals can be hard to finance, “as basically you are buying a hotel room that you rent out for a day or a few weeks. CIBC is one of the few lenders who will finance a unit in a rental pool, but most lenders won’t.”

For vacation or weekend retreat homes, buyers can put as little as 5 per cent down. But there are stipulations, Dopp says, such as having the property owner-occupied at least part of the year. It has to be a one-unit home suitable for year-round use. And you have to qualify for a mortgage under current rules.

“The closer you get to the mountain, the more expensive real estate is,” Dopp says. “People can use their second home as their own ski chalet or rent it out for the season and go south for the winter, and use it themselves in summer. That’s very common.”